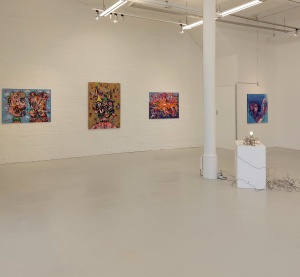 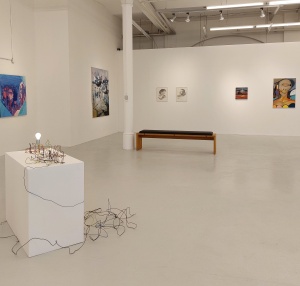 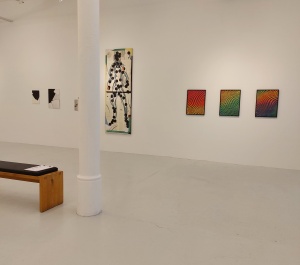 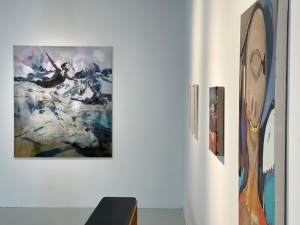 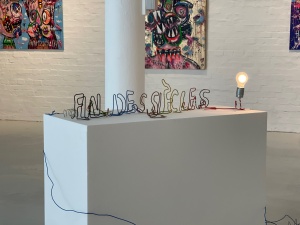 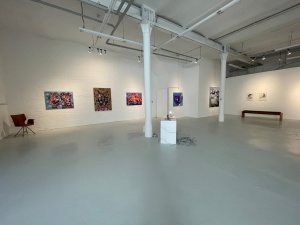 In our big summer show we present selected works by eleven artistic positions.

The artist studied with Karl Horst Hödicke at the University of Arts and excelled as a master student in the painting class. Today he lives and works in Berlin. In his sensitive works, Patrick Cierpka plays with light and shadow, sets faceted colours against a radiant white. One could get the impression that Patrick Cierpka's works are like the open lens of a camera, catching an enormous amount of light. Sunshine and colour play together, appearing on water-like surfaces, penetrating through the branches of trees. No up or down can be discerned and the viewer is invited to immerse himself in an experience far removed from space and time: time seems to stand still, space does not exist. ´It is summer. I am lying on a meadow, a forest opening next to me. Then I open my eyes only very briefly - just a crack - and it is precisely this moment that fascinates me. That's what I want to depict in my works,' says Patrick Cierpka.

The master student of Prof. Wolfram Adalbert Scheffler works on his striking canvases in Berlin and Erfurt. Again and again, he refers to contemporary pop culture, both with his subjects and with their titles. In doing so, he makes use of multi-layered materials with which he brings out the figurative moments in an energetic style. He is not guided by abstract constructs or artificial attempts to explain the world. He creates new pictorial worlds, quoting the great masters of art history, and always remaining committed to the ideals of art history in the structure of his works. It is through his own visual language, the use of modern stylistic devices and symbolism, that makes this democratisation of art and its reception possible. Marc Jung's career bears witness to the seriousness of his work from the very first moment of his artistic activity.

The artist Katrin Kampmann, who works in Berlin, transports us with her flamboyant works into a dreamlike world of flowing colours. She studied at the University of Arts in Berlin and was a master student of Prof. K.H. Hödicke in 2006. She describes herself as an artist who totally immerges herself in the studio during intensive creative phases and forgets the big city around her. The colours are always the theme of her pictorial worlds, their vibration and their sound qualities. Here she consciously plays with the role of the viewer, whose eyes wander over the paintings and creates very individual patterns of movement. "I look for a motif, take it and hold on to it," is how Katrin Kampmann describes her artistic process.

Florian Lechner lives and works in Munich, where he also studied sculpture with Hans Op de Beek and Hermann Pitz and graduated as a master student. Clear lines, simple elegance and a reduction of colour characterise his initially sober-looking works. Here, the classical limitations of painting are overcome and the space is taken over by the accurate shapes. Florian Lechner's oeuvre captivates with its clear lines, its simple black and white elegance and a straightforward opulent reduction. The first impression of his works is usually deceptive: what at first appears sober and neutral, Lechner subverts with subtle means. His objects know how to free themselves from the limitations of classical painting art and conquer the room. Lechner detaches the artwork from its physical existence, shifts it into the ephemeral and juggles with the viewer's perception. Florian Lechner lives and works in Munich.

The artist completed his studies in Fine Arts at the University of Arts in Berlin. In 2014 he was a master student with Valerie Favre, today he lives and works in Cottbus. In his works, David Lehmann skillfully plays with content-related and technical possibilities. This narrow tightrope walk between the two extremes can be observed within his pictorial worlds all the times: Wit is juxtaposed to deep seriousness, colour is played off against form on the canvas, while figuration becomes existent alongside subtle abstraction. Furthermore, the artist makes use of the exciting interweaving of past and future by incorporating art-historical references juxtaposed with contemporary historical subjects. In the process, his artistic alter ego also takes shape within the canvas works.

Chris Newman is an experimental border crosser between the fields of music, painting, video, drawing and literature. Since the early 1980s, Newman has composed concerts and musical performances for festivals and radio productions as well as commissioned orchestral works. Since 1989 he has devoted himself to painting.

Subsequently, since 1994, he has created installations that combine two different media in the form of live installations and installed concerts, which mutually reinforce each other. Recently, he has increasingly presented his paintings sculpturally and installatively by cutting up the canvases and sewing them back together.

Carsten Nicolai first studied landscape architecture in Dresden (1985-1990). He has been showing his work as a visual artist since 1986 in renowned galleries, municipal art collections, international museums and, for example, at the documenta in Kassel and the Venice Biennale.

Since 2015, he has been working as a professor of art with his focus on digital and time-based media at the Hochschule für Bildende Künste in Dresden. As a musician, aka Alva Noto, Nicolai is one of the best-known representatives of contemporary electronic music. Today he lives in Berlin and Chemnitz.

He is part of a generation of artists who work intensively in the transitional area connecting music, art, and science. In his work, he tries to overcome the separation of human sensory perceptions by producing light frequencies and acoustic signals perceptible to the eyes and ears. His work can be found in a large number of international public collections, and he is the recipient of numerous grants and winners of international awards.

The artist lives and works in Leipzig, where he studied with Prof. Helmut Mark at the Academy of Visual Arts, among others. On closer inspection, the clearly structured objects prove to be accurately folded paper works, which reveal novel patterns in their alternation between protruding and receding elements. The underlying mathematical principle of the works unfolds an austere beauty. The use of different working techniques and the transfer of these concepts into digital forms show the artist's artistic range as well as his ability to change. In every art form, no matter how differently chosen, Jirka Pfahl manages to captivate and inspire the viewer.

Nina and Torsten Römer have formed the artist duo Römer + Römer since 1998 and both studied with Prof. A.R. Penck in Düsseldorf. Sources of inspiration for their pointillist works are photographs of lived together journeys. Festivals and places abroad are brought onto the canvases in a meticulous and collaborative way and unfold an impressive power, especially in the large formats. The process of stepping back and forward in front of their works plays a significant role in the viewing. While the scenes shown, when viewed from a distance, reveal themselves as clearly delineated moments that seem almost photorealistic, when viewed up close prove to be masterpieces of pointillist painting. Every moment in which the brush touches the canvas is carefully placed and manifests itself in coexistence with other traces of paint to form a firmly delineated shape.

Sandra Schlipkoeter bases her works on a physical phenomenon which she isolates from the space of the invisible and transfers it into a visible context. Interferences are superimpositions of waves in the optical space that create complex line patterns and are made visible on the computer screen by means of a digital photograph. Wave-like lines seem to manifest themselves on the screen in undefinable rhythms.

Miriam Vlaming studied with Prof. Arno Rink at the Academy of Graphic Arts and Printing in Leipzig. She lives and works in Berlin. In her mysterious pictorial worlds, she directs the juxtaposition of people and nature, whereby a constant oscillation between abstraction and figuration sends the viewer on a journey of discovery. By using smooth layers of paint alternated to thick brushstrokes, the artist proves herself to be an accomplished master of colour. With the help of ambiguous metaphors, the artist makes her way into a world full of enigmas, for which it is necessary to create a story that talks both to the artist and the recipients. Unresolved questions can be conjected and the familiar and existential are brought into focus.