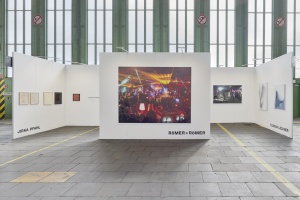 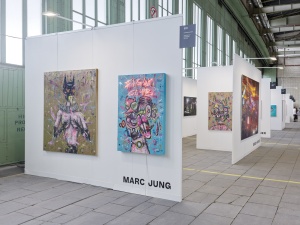 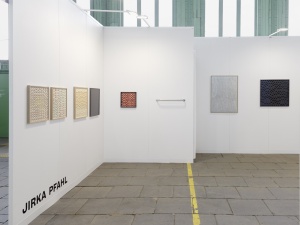 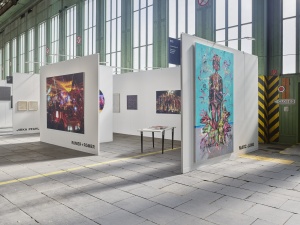 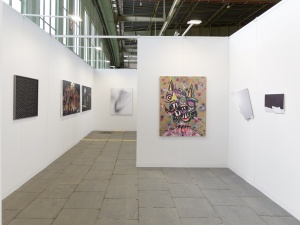 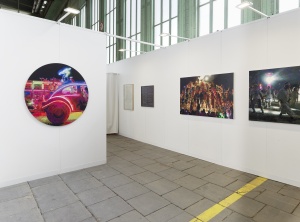 ›For me, art is like the funnel of an oversized meat grinder that absorbs the daily madness and rots it‹, says 34-year-old artist Marc Jung. His working method is fast-paced, as if he wanted to immediately visualize the whole flood of information that falls into this funnel. As sources of inspiration he uses regulars' table slogans, pop melodies or found objects from the Internet, which reappear in his works in an alienated way. The artist describes his style as 'figurative post-abstract expressionism'. He has fun with stark contrasts and scene changes. The main thing is not to stand still.

Florian Lechner's works are like cuts into our reality. His artistic radius of action ranges from three-dimensional real space, in which we move and act, to two-dimensionality or flatness, to digital and virtual space. Lechner lets the individual qualities of these so different spaces collide. They cancel each other out and in this way multiply each other again. The precision of their execution is almost nuanced, and they confront us as a visually exuberant experience of simplicity, elegance and brute baroque excessiveness. The "raumskizzen", "raumbilder" and "raumschnitte" expand our world into another level and bring it back to ours. Found situations and artistic interventions approach each other, spaces of different character and quality overlap and interlock.

The artist Florian Lechner was born in 1981 and studied sculpture at the Academy of Fine Arts in Munich. He found his way from Concrete Art to "contemporary Baroque" through his renowned professors Hans Op de Beeck and Hermann Pitz, with whom he was a master student in 2012.

Jirka Pfahl was born in Wurzen in 1976 and studied media art at the Academy of Visual Arts (HGB) in Leipzig from 1998-2004. In 2005 and 2006 he was a guest student at the Academy of Fine Arts in Munich with Joseph Kosuth. From 2006 to 2010 he was a master student with Helmut Mark at the HGB Leipzig, 2010 and 2011 he taught at the evening academy of the HGB in Leipzig. Until 2003, his artistic work was almost exclusively concerned with non-material works, until the first experiments with prints followed.

In his new works Jirka Pfahl names the differences between digital/analogue and original/copy. The different working techniques and also the transformation of the underlying concepts into digital forms show the artistic range of Jirka Pfahl, as well as his mutability and his talent to captivate and inspire the viewer in every art form, no matter how differently chosen.

Römer+Römer are known for their unique position in painting. Nina Römer (*1978 as Nina Tangian in Moscow) and Torsten Römer (*1968 in Aachen) met during their studies of painting with A.R. Penck at the Düsseldorf Art Academy.

In their joint artistic work, they repeatedly address major cultural events in which people come together for a temporary state of emergency. In 2017, for example, the Berlin artist couple travelled to Nevada to take part in the 'Burning Man Festival'; in 2018 they visited the music festival 'Fusion', which was held at a former Soviet military airfield in Mecklenburg. From the photographs taken on site, the artists select individual ones, on the basis of which new series of their work are created.