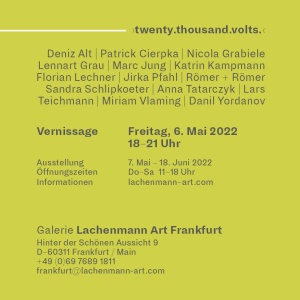 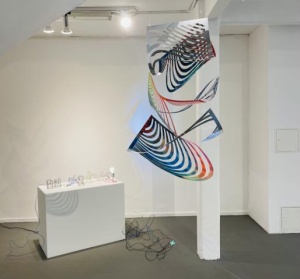 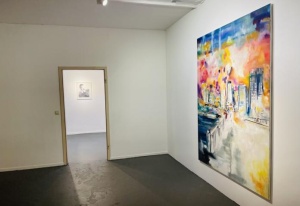 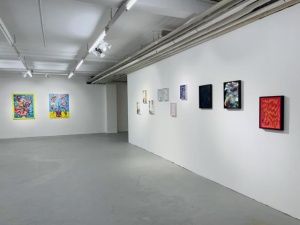 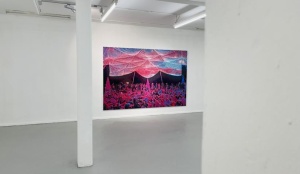 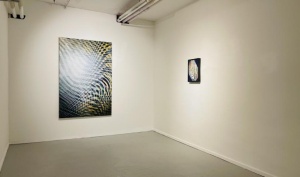 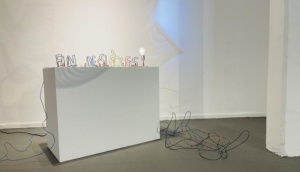 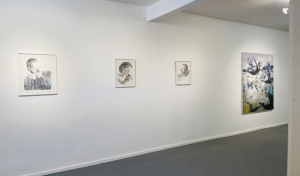 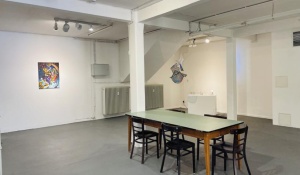 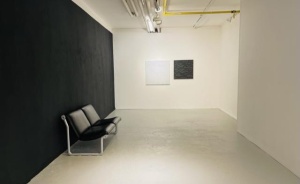 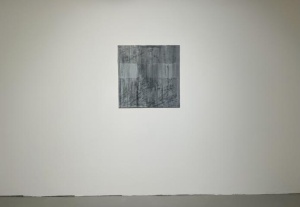 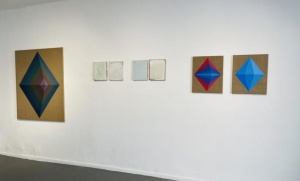 With this large group show in its Frankfurt premises, Lachenmann Art Gallery presents fourteen artistic perspectives and a selection of their current works. The tensions that evolve between the individual works captivate the viewer and prove their simultaneous existence as poetic counterparts. Partly loud, large and in intense colours, some works on canvas reach out, while colour-reduced works develop an unexpected power. The air shimmers, the space seems charged by the effect of the various objects, which also enter into a direct dialogue with each other. The diverse characters and the vividness of the artists find their way into the works shown here and enliven the exhibition spaces. White walls are filled with life, energy, tension and dynamism.

The broad selection of participating positions provides a comprehensive view of the work of contemporary artists who reveal and share their subjective views of the world in a breathtaking spectrum.

The artist lives and works in Frankfurt am Main and studied at the Hochschule der Bildenden Künste. In his works, he deals with the topicality of history and the subjective coming to terms with the past. Architectural moments play an important role in direct juxtaposition to the individual, through which socially current discourses are negotiated.

Cierpka studied with Karl Horst Hödicke at the University of the Arts and shone as a master student in the painting class. In his sensitive works he plays with light and shadow, sets faceted colour against radiant white. A pointillist rain of colour pours over his latest work 'SOURCE', flickering across the canvas.

The Swiss artist dedicates his work to colour field painting, which is particularly striking in the works shown here because of its reduction of colour. The materiality of colour plays an important role here. Grabiele's artistic process is characterised by a repeated application and removal of this material, whereby the artist's hand and its characteristic ductus remain in each work.

The Berlin artist studied fine arts with Prof. Leiko Ikemura and stands out as a master student. His colourful worlds of colour appear almost relief-like through the impasto application of paint, which enters into an exciting contrast with the light-hearted motifs, which Lennart Grau repeatedly borrows from the lightness of the Rococo. The aesthetics of the past are here transferred into a contemporary context.

The master student of Prof. Wolfram Adalbert Scheffler works on his shrill works in Berlin and Erfurt. Again and again, he refers to contemporary pop culture, both with his pictorial objects and with the respective titles. In doing so, he makes use of multi-layered materials with which he brings the figurative moments to light in an energetic style.

The artist Katrin Kampmann, who works in Berlin, transports us with her colourful works into a dreamlike world of flowing colours. While monumental mountain worlds manifest themselves on canvas, Kampmann's latest portraits show personalities in a delicate manner, all of whom seem quiet and absorbed.

Florian Lechner lives and works in Munich, where he also studied sculpture with Hans Op de Beek and Hermann Pitz and graduated as a master student. Clear lines, simple elegance and a reduction of colour characterise his initially sober-looking works. Here, the classical limitations of the art of painting are overcome and the space is taken over by the accurate shapes.

The artist lives and works in Leipzig, where he studied under Prof. Helmut Mark at the Academy of Visual Arts. On closer inspection, the clearly structured wall objects prove to be accurately worked paper folds, which reveal novel patterns in their alternation between protruding and receding elements. The underlying mathematical principle of the works unfolds an austere beauty.

Nina and Torsten Römer have formed the artist duo Römer + Römer since 1998 and both studied with Prof. A.R. Penck in Düsseldorf. As sources of inspiration for their pointillist works, photographs of common journeys repeatedly find their way into the pictorial world.

selves on her canvases in an indefinable rhythm. She studied with Prof. Eberhard Havekost at the Düsseldorf Art Academy.

Sandra Schlipkoeter bases her works on a physical phenomenon which she isolates from the space of the invisible and transfers it into a visible context. Wave-like lines seem to manifest themselves on her canvases in an indefinable rhythm. She studied with Prof. Eberhard Havekost at the Düsseldorf Art Academy.

Anna Tatarczyk studied fine arts with A.R. Penck and Siegfried Anzinger at the Düsseldorf Art Academy. She was also an assistant to Jörg Immendorff for two years. She lives and works in Wuppertal. The rhombus occupies a special position for the artist among geometric shapes. She lets them dance on the top and catches the light with them. Her work stands for the continuation of Concrete Art, can be located between Concrete Art and Op Art, as well as between Minimalism and Arte Povera.

The artist, who lives in Berlin, studied under Daniel Richter at the Berlin University of the Arts, among others, and is characterised by repeated art-historical quotations, which he effectively transfers into contemporary contexts in his works. Painting processes remain clearly visible on the canvas works and blend into the figuration of the respective objects. This creates an exciting play between figure and artistic trace.

Miriam Vlaming studied with Prof. Arno Rink at the Academy of Graphic Arts and Letterpress Printing in Leipzig. She lives and works in Berlin. In her mysterious pictorial worlds, she negotiates the direct juxtaposition of people and nature, whereby a constant oscillation between abstraction and figuration sends the viewer on a journey of discovery. Sometimes glazed, at other times impasto, the artist proves herself to be an accomplished master of colour.

The artist, who lives in Kaiserslautern, creates abstract, monochrome works with graphite, which are characterised by their radical reduction. Yordanov exploits the fine nuances between black and white, allowing the material to become the constitutive moment of the work and thus creating the monumental effect of the objects. Achromatic tonality pairs with the texture of the surface and conjures up an almost industrial work character.