Male Perspectives from the 90's 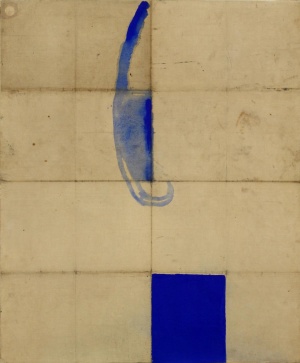 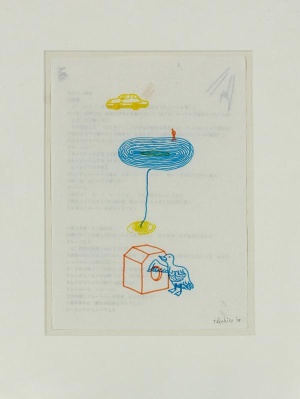 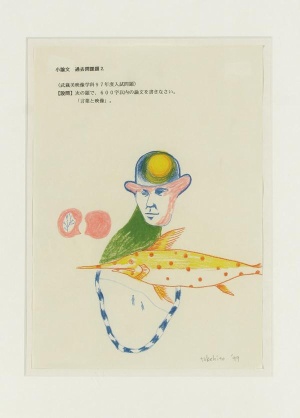 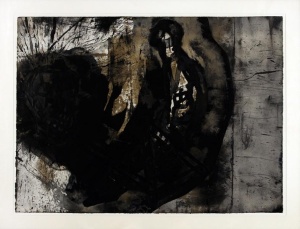 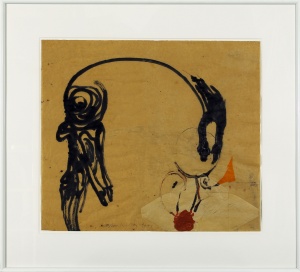 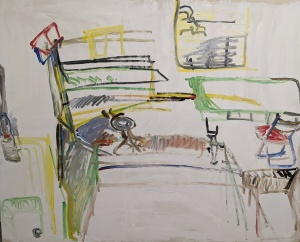 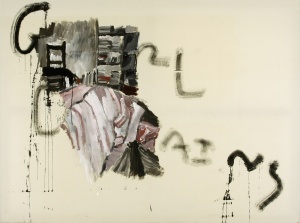 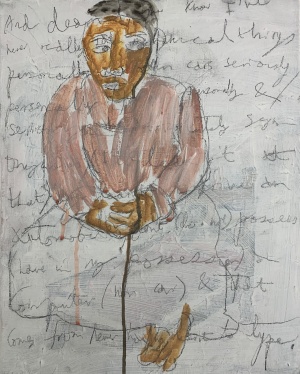 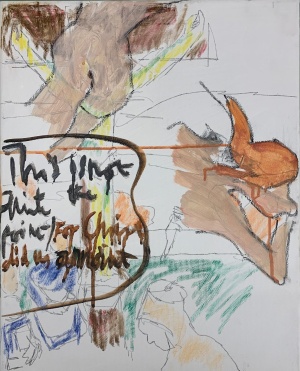 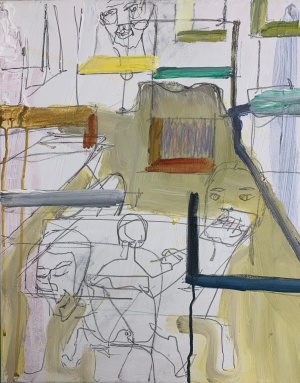 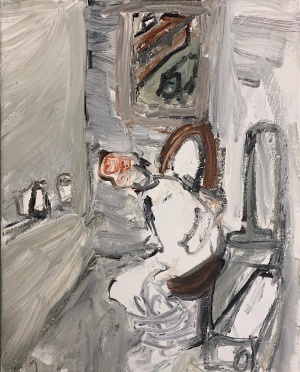 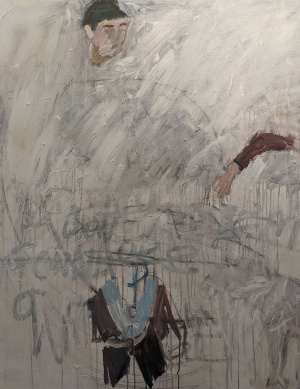 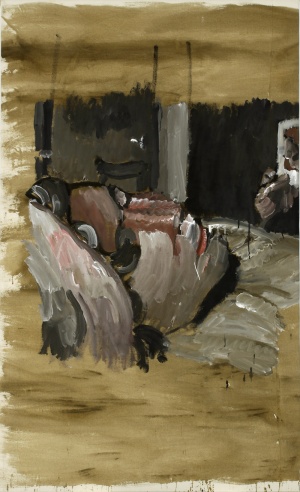 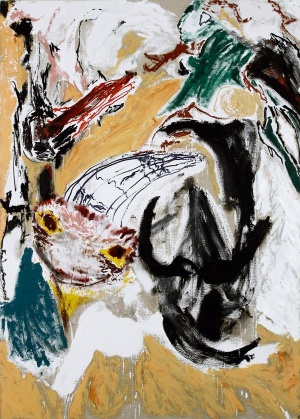 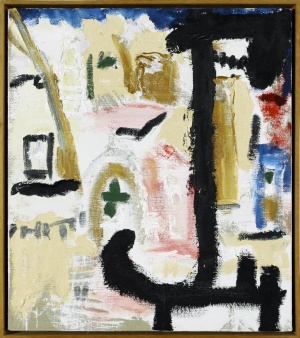 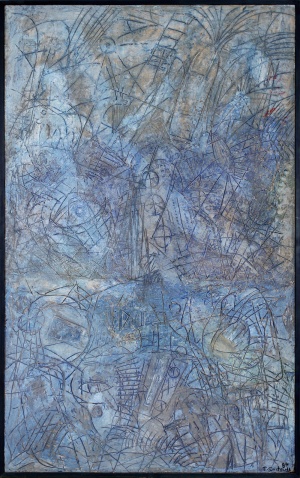 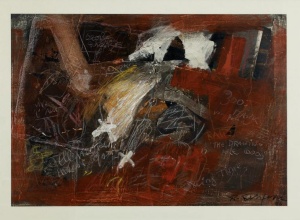 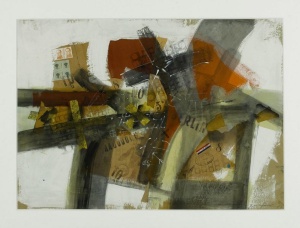 Male Perspectives from the 90's

›Male Perspectives from the 90's‹

›Male Perspectives from the 90's‹

The European art world of the 1990s was shaped by the social upheavals caused by the fall of the Iron Curtain and the reunification of Germany. Increasingly, new territories were being discovered in art by way of multimedia tools while conventional artistic means disappeared more and more from the creative language of many young artists. Thus, beyond the Atlantic border, a bold artistic exchange developed at the end of the 20th century, which often explicitly addressed socio-cultural conditions and manifested postmodern trends.

The latter can be seen, for example, in the fragmentary character of Robert Rehfeld's mail-art works from the GDR period and, beyond that, in a rebellious act against totalitarian systems, which is considered the driving force of the mail-art scene. A strong emphasis on subjectivity also emerged from these revolutionary approaches, as can be seen, for example, in Chris Newman's perception of people and space, as well as in Takehito Koganezawa's depictions of the everyday. In addition, elitist notions of genre were to be broken up, as evidenced by the works of Don van Vliet and Carsten Nicolai, which themselves intertwine sound and image. Michael Morgner also resisted traditional notions of genre, rejecting classical elements and using asphalt as a creative medium in his works.

The exhibition ›Male Perspectives from the 90's‹ unites the disruptive power of the individual artists and thus allows dialogues to emerge across the boundaries of their own oeuvres. These are to be spotlighted in this exhibition and, in a direct reference to each other, fuel a discussion about the time back then. Expressive works are lined up one after the other reflecting an era of upheaval and allowing medial innovations to flow into their experimental genesis just as much as traditional pictorial means and themes. This male perspective on the art of the end of the 20st century can be re-evaluated and re-located in a contemporary view from today's perspectives.

James Brown dealt intensively with the significance of symbols in art and exhibited together with Keith Haring and Jean-Michel Basquiat, among others. He lived in California, Paris, New York, Morocco and Mexico.

In his art, Brown combines archaic symbols from the ritual context of indigenous peoples in Africa and the Americas with abstract and concrete forms. His works are also characterized by the use of unusual materials. In his painting presented here, he uses an old map as a support material and inscribes himself on the surface of the picture in the form of blue paint.

His works, which are based on a poetic concept, derive from the perception and observation of everyday objects - their movement, sounds and rhythms. They embody experienced moments and feelings that are linked to specific temporal and spatial conditions in the form of a unique event.

Michael Morgner studied at the Academy of Visual Arts in Leipzig.

At the end of the 1970s he developed the technique of "lavage", a partial washing out of ink by means of a strong jet of water. This technique has an inherent moment of randomness, which repeatedly inspires Morgner to new approaches within his own work. The artist determines water as a means of painting and uses it in large quantities within the genesis of his work. His works reflect basic problems of human existence and the conflicts between the individual and the group.

Chris Newman is an experimental border crosser between the fields of music, painting, video, drawing and literature. Since the early 1980s, Newman has composed concerts and musical performances for festivals and radio productions as well as commissioned orchestral works. Since 1989 he has devoted himself to painting.

Subsequently, since 1994, he has created installations that combine two different media in the form of live installations and installed concerts, which mutually reinforce each other. Recently, he has increasingly presented his paintings sculpturally and installatively by cutting up the canvases and sewing them back together.

Carsten Nicolai first studied landscape architecture in Dresden (1985-1990). He has been showing his work as a visual artist since 1986 in renowned galleries, municipal art collections, international museums and, for example, at the documenta in Kassel and the Venice Biennale.

Since 2015, he has been working as a professor of art with his focus on digital and time-based media at the Hochschule für Bildende Künste in Dresden. As a musician, aka Alva Noto, Nicolai is one of the best-known representatives of contemporary electronic music. Today he lives in Berlin and Chemnitz.

He is part of a generation of artists who work intensively in the transitional area connecting music, art, and science. In his work, he tries to overcome the separation of human sensory perceptions by producing light frequencies and acoustic signals perceptible to the eyes and ears.

Robert Rehfeldt studied at the Hochschule für Bildende Künste in Berlin from 1948 to 1953 and initially worked as a photojournalist, graphic artist, and press draftsman. From 1963 he worked as a freelance experimental artist and became a member of the Association of Visual Artists of the former GDR, which enabled him to receive work contracts and commissions from government bodies and agencies in respect of building and construction related art (public art).

In the early 1970s, he became acquainted with the international mail art scene and thereafter strongly involved in the field of net art. Robert Rehfeldt built up an impressive network of contacts between Western and Eastern Europe, the USA and Latin America and engaged in postal art exchanges with important contemporaries such as Nam June Paik, Robert Filiou, Dick Higgins, and others. This resulted in the first Mail Art exhibition in the former German Democratic Republic in 1975, after Rehfeldt got artists from all over the world to design and send him a postcard.

In addition to the extensive graphic work he produced, he as well devoted himself to photography and Super 8 film, among other things. He also created several large sculpture groups.

Don van Vliet was known for his experimental rock music from the late 1960s under the pseudonym Captain Beefheart. From 1985, when his career as a musician ended, he saw himself as a painter, author, poet, and composer and was celebrated as a successful painter. At the beginning of the 1990s, Don Van Vliet withdrew completely from the public eye.

Even though he had already turned his back on music in the 1980s, he brought it back to life through a new form in his paintings. The colors ring together in his lively compositions. Gesture, color, and surface seem to vibrate like the strings of a guitar producing their own sound.