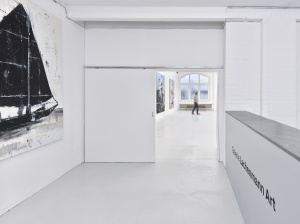 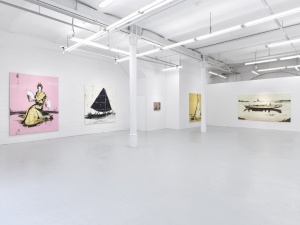 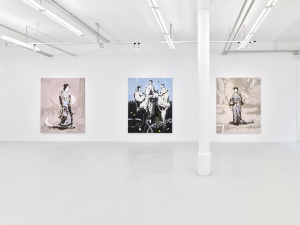 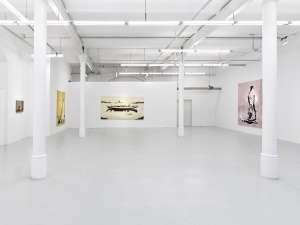 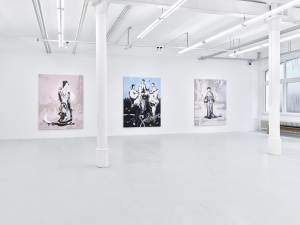 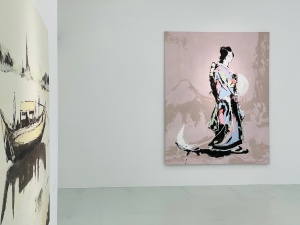 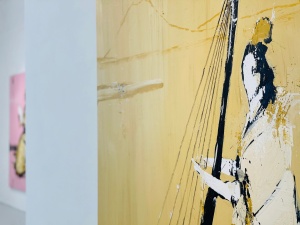 The paintings of Berlin-based artist Lars Teichmann invite us to take a walk through a new pictorial world and, with the theme of the geisha, transport us into an enchanting, yet expressive environment. Pastel-coloured surfaces nestle up against contoured black outlines, figures personify themselves through a colourful contrast to the monochrome background and, in their larger-than-life appearance, enter into direct communication with the viewer. The white spaces of the faces remain undefined moments of the bodies, through which we project our subjective feelings and associations into representations that seem familiar to us.

Lars Teichmann's reduction of the means of representation and compositions is usually based on art historical quotations, which initially inscribe themselves unconsciously. As a source of inspiration for his new works shown here, Lars Teichmann uses Japanese prints, thus creating the translation of an ancient tradition into the present and placing the focus of the representations on the essence and character of the appearance. Especially the coloured prints of the 18th century inscribe themselves here. The absence of light and shadow effects as well as the renunciation of a classical perspective effect are regarded as significant means of these technique prints. An illusion of depth is created by superimposing individual elements, the execution of which has always been limited to small formats and is translated by Lars Teichmann into large-format pictorial moments in a contemporary manner.

Even though the artist repeatedly takes his cue from moments of the past and thus proves himself to be a connoisseur of art history, he deliberately plays with the stimulation of collective memory. The paintings are enriched with thematic worlds that awaken memories, associations and subjective mind games in every viewer. For the artist, the "revival of an association" represents an added value to a painting, as the viewer receives a stimulus that continues to work in the body and thus has a high degree of recognition with a wide scope for interpretation.

The series of Japanese works, in which the motif of the geisha is repeatedly found, proves to be particularly interesting in terms of iconographic references and its characteristic mode of representation. The geisha as entertainer, preserver of Japanese tradition, educated woman of grace and connoisseur of the arts is revealed here as a familiar theme. What is particularly fascinating for the artist is that the culture of Japan also found its way into Western culture in the early 20th century and that many of the Asian subjects and motifs had already become part of the collective memory. With his works, Lars Teichmann takes us into an examination of a traditional theme, which the artist updates and translates into the contemporary. His works always oscillate between figuration and abstraction, thus actively challenging the viewer and sensitising us to an inherent power of perception.

Lars Teichmann also uses the Kabuki theatre of the Japanese Edo period as a source of inspiration and thematically inscribes this social experience of song, dance and pantomime, whereby he is particularly interested in the costumes and fairytale-like stage design.

A reduced stage-like staging, the depiction of opulent fabrics -both skilfully readable by only a few brushstrokes- is a recurring element in the artist's work. While the tradition of geisha culture is characterised, among other things, by the heavy use of make-up on the face, which creates an almost mask-like effect, the motif of the "associative face" also emerges as an absolutely recognisable feature in Lars Teichmann's oeuvre. This impressive approach of a double inscription of the white "empty space" of the faces supports the iconographic readability of the works. He himself describes this expression as an important moment in his work, as each figure clearly conveys mood, attitude and atmosphere even without the meticulous elaboration of facial features. Like performers on a stage, the faceless persons appear, not only entering into a mysterious communication with the viewer, but also establishing contact with each other across the exhibition space.