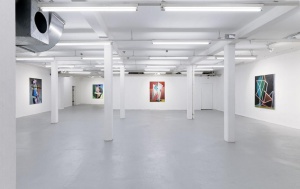 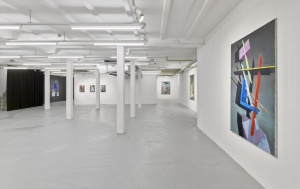 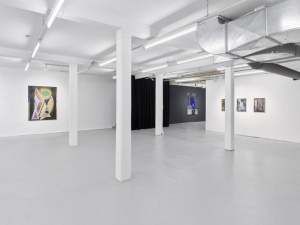 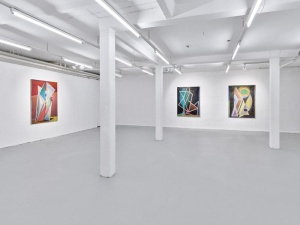 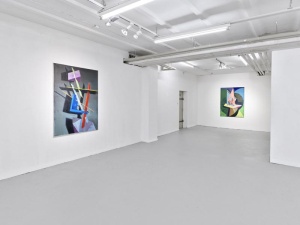 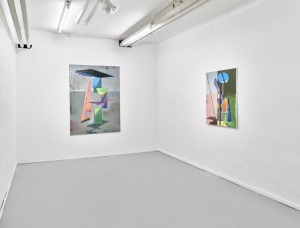 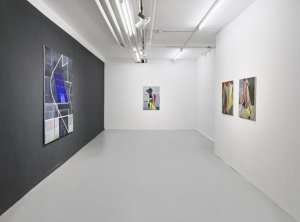 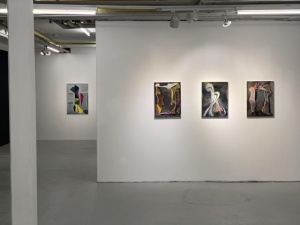 Genti Korinis painted sculptural objects of spatial forms and lines are entirely abstract and yet they reveal their architectural origins. Geometric surfaces, constructional elements, and threedimensional vectors are joined in vertical constellations in such a way that they result in coherent objects. However, these formations arbitrarily defy the possible in terms of structure and statics and hover freely in the space. At first glance, they appear to be instable, as if they might collapse at any moment. But then the inner tension becomes discernible by whose centred balance they are held up quite naturally.

The constituent components of the objects are mostly geometric shapes such as rectangles, rhombs, and ellipses that are translated to threedimensionality and then tilted, laid, hung on or pushed into one another. Basic solid figures like cylinders and pyramids validate this new spatiality of the, in fact, twodimensional geometries. Even lines attain a third dimension, thereby turning into rods or scaffolds. Shadowings, gradients, and horizons open spaces into the image depth that, in their reduced colouration, insinuate virtual, computer-generated scenographies, evoke cyberspace, appear like projections or backlighting. The seemingly technical and artificial hue of the space enhances the clear colours of the objects in the foreground. Some additionally seem to be illuminated by invisible light sources beyond the image margins, which becomes apparent in the crisp countours of the shadows and the corresponding light spots. The colouration and the materiality of the object elements have something technical about them as well. Semitransparent and impermeable, neon-coloured and metallic, polychromely shimmering and unicoloured surfaces reflect the light and direct the gaze, continuously keeping it moving along the constructed lines.

The conceptual starting point for Genti Korini is the eclectic postcommunist architecture of his hometown Tirana. The seemingly infinite stylistic possibilities of the new creative freedom are being fathomed there with much individualistic motivation, more often than not with rather offbeat results. This architecture explores and stretches the boundaries of the thinkable. The unique visual character of his environment as a visible sign of the systemic and cultural transformation is the source of a diverse vocabulary of colours and shapes. It is an abundant pool of components and materials that the artist abstracts digitally on the computer and makes use of in own pictorial assemblies. Based on the objective calculations of the computer, he creates the middle-format to large-format oil paintings in which the digital sketches are developed further in his subjective handwriting. The painted objects are technically calculated and could thus in theory be spatially realizeable, but in a real space would evade manifestation because of physical conditions such as gravity, mass, and weight.

Along those lines, the title of the exhibition,
›Speculations / Simulations‹ , is an indicator of the purely theoretical physicality of the objects and of the space in which they are situated: They speculate about the space, they simulate architecture. Speculation as well as simulation are theoretical, prepractical processes that are still open in their results but work within a given framework and with existing elements. Genti Korini's artistic concept is based on the three consecutive layers architecture, computer, and painting, which he fluidly interconnects, thereby playfully investigating the boundless possibilities of postmodernism and the present. In his abstract constructions, he fragments a multifaceted cityscape into many pieces, digitally reassembles them and lastly reconstructs them in painted form. These surreal architecture objects are simultaneously a commentary and a homage.

Genti Korini was born in 1979 in Tirana in Albania where he lives and works today. He spent the first years of his art studies in Cluj, a Romanian city known for its art academy and active artistic community, before returning to Tirana for his Master's degree. After solo exhibitions in Albania, Romania, Denmark, Great Britain, and the United States, this is Genti Korini's first one in Germany. His works are already part of a number of private and public collections.