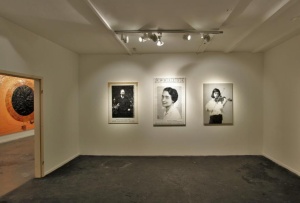 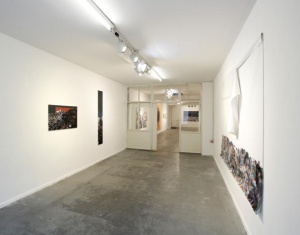 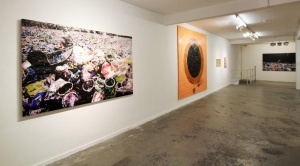 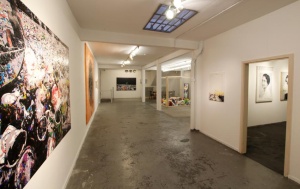 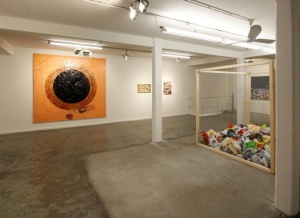 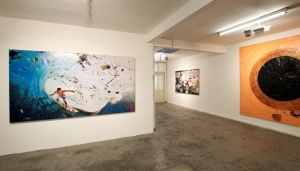 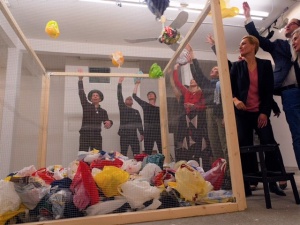 Plastic waste, one of the most urgent problems of our time, is the main subject – and the main material used – by the artist Reifenberg. Landscapes are made just out of plastic bags. He creates dystopic scenes from thousands and thousands of hand-cut snippets of the throwaway product. They include oil fields where nature is deprived of its raw materials, garbage dumps where children are still searching for usable materials and water surfaces covered by dense garbage carpets. With this clearly formulated artistic position, the exhibition Garbage Matters at Lachenmann Art Frankfurt takes a stand on a current problem that concerns every one of us.

Since 1995, Reifenberg has been working exclusively with the technique he has developed himself  to construct mosaic-like images from individual pieces of plastic bags which have been smoothed out. This results in three-dimensional layers of material - ›Landscapes of Layers‹, as the artist says - that are so different from a mural, which is just flat. A true Herculean task that requires a great deal of patience and precise work. Over the years, Reifenberg has assembled a huge collection of plastic bags from all over the world. He stores them in his Berlin studio in dozens of boxes sorted by colour. For his motifs, from small to very large, he selects the areas to be cut out of the bags according to colour, sometimes also according to writing and language. He then usually creates millimetre-sized ›micro plastic‹ from them, but also much larger surfaces. The results are three-dimensional picture worlds that oscillate between realism and abstraction and thematise their material themselves.

Garbage Matters. Garbage has a meaning, although it may seem contradictory at first. Things become garbage when they lose their usefulness, when they lose their meaning. However, this meaning only shifts and does not disappear because plastic waste in particular returns to us like a ghost. It now appears everywhere in the outdoors, even in the Arctic¹ and in the deep sea. Of the currently 300 million tons² of plastics produced worldwide annually, which are often only used just for a few minutes, a staggering 7.5 million end up in the sea³.

In his exhibition at Lachenmann Art, Reifenberg shows us artistically how the once celebrated material plastic is drastically changing our planet. What began for the artist two decades ago as a muddle of materials has now not only developed into his full-blown artist’s handwriting, but also has a strong connection to a universally actual problem.

Plastic is described by using plastic. Material and subject are inherently linked in the works exhibited. They are interdependent and interpenetrate which maximizes the relevance of the works and increases their expressiveness with inner tension on several levels. Thus the artist sees the material of the plastic bag - mostly polyethylene or polypropylene⁴ - ambivalently, on the one hand as ›indestructible‹⁵ and powerful in its texture, but on the other hand also as delicate and fragile in its physicality. Reifenberg has been so preoccupied with this material that the generally suboptimal handling of resources by humans has become an artistic theme of its own accord. He even attributes a philosophical metaphor to the plastic Resopal, with which he worked in the late 1980s before turning to the plastic bag as a working material in the 1990s. With its layered structure it stands for ›a social world order between the wooden lower class, the stabilizing middle class and the high-gloss upper class‹. The multi-faceted ambiguity in Reifenberg‘s works explores these diverse thematic paths with a sharp eye for detail, but never loses its connection to its starting point, the material itself.

The exhibition Garbage Matters not only inspires reflection, but also encourages action. Every tiny particle of plastic is important. Reifenberg will probably not be lacking in artistic material for some time to come.

¹ Cf. Goedeke, Lena von (2018): Recalibration (Arctic Circle 2018), Lena von Goedeke (ed.), Berlin, online at http://vongoedeke.com/2018/10/26/neukalibrierung/ (called on 7.11.18).
² In the 1950s it was „only“ 1.5 million tons per year. See the following link of the Nature Conservation Association.
³ Cf. Detloff, Kim Cornelius (2018): Plastic waste and its consequences, Naturschutzbund Deutschland e.V. (Ed.), Berlin, online at https://www.nabu.de/natur-und-landschaft/meere/muellkippe-meer/muellkippemeer.html (accessed 7.11.18).
⁴ See Wikipedia (2018) (ed.): Plastiktüte, online at https://de.wikipedia.org/wiki/Plastiktüte (accessed 7.11.18).
⁵ In the early 1990s, an international beverage group used this word to promote the then innovative returnable PET bottle. In the meantime, the word has even made it into the dictionary.